Run the assume command to assume a role with Granted.

The first time you run assume, you'll be prompted to select a web browser for Granted to use when opening web consoles for your roles. You should see a prompt similar to the one below.

If you select Firefox, you'll be prompted to install the Granted Firefox addon. Follow the steps in the wizard and then rerun assume.

To update the web browser that Granted uses you can run granted browser.

The second time you run assume, you will be prompted to set up a shell alias. You should see a prompt similar to the one below. The prompt may be slightly different depending on the shell that you are using.

Restart your shell by opening a new terminal window. The first-time setup for Granted is now complete.

After completing the first-time setup, run assume again. You should see a list of installed roles similar to below:

If you don't see any roles listed when running the command above, ensure that you have configured your AWS roles as described in the requirements section on the Deployment page.

You can search for a role by name by typing on your keyboard. Select a role using the arrow keys and press Enter to assume it. If the role uses AWS SSO, you will be prompted to log in through your browser.

You should then see an output similar to below:

You can use the AWS STS Get Caller Identity API to verify that you have assumed the role. Run the below command from the same terminal window that you called assume from. You should see an output similar to below, with the UserId, Account, and ARN fields matching your role's configuration.

Assuming a role by name​

To avoid needing to open the role selector, you can specify the name of the profile as an argument by running assume <PROFILE_NAME>:

With Granted you can specify the --duration or -d flag to set the temporary credentials duration. Note that this will have to be within the default maximum duration set on the role when the role was created.

Here is the current list of providers that work with Granted:

We are looking to add more to this list in the future. Contributions for additional credential providers are most welcome. assumer_aws_azure_login.go in our source code is a good example to use as a starting point.

If you are using a custom SSO credential provider like aws-azure-login or aws-google-auth, Granted allows you to pass through flags to run custom procedures using those providers.

Using the -pt or --pass-through flag will allow you to pipe commands into that internal command.

under the hood will run :

When using Granted on MacOS you will receive a keychain access prompt similar to the one below when Granted uses cached AWS SSO credentials to assume roles. 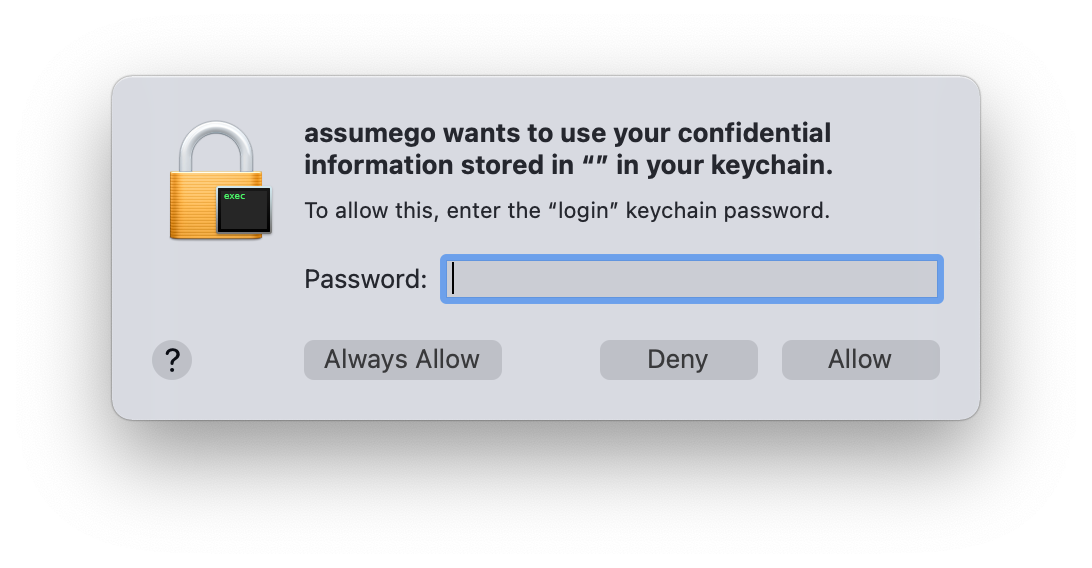 This is expected as Granted stores the AWS SSO credentials in your keychain. The binary name which you see in this prompt should always be assumego.

In addition to assuming roles for use in the terminal, Granted allows you to open multiple cloud accounts in your web browser simultaneously. Next, you'll learn how to use Granted with your web browser.